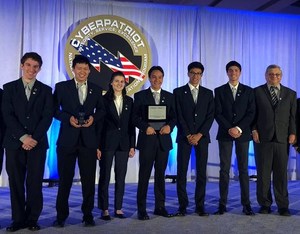 Two other North Hollywood teams were among the 25 that competed in Baltimore for the national title, emerging as finalists from the more than 5,500 original entries. Team Truman finished a close second, and Team Balto came in ninth.

“There were no rookies – every school that was competing had been there before,” said Jay Gehringer, who teaches Advanced Placement computer science at North Hollywood and has coached its CyberPatriot teams since 2012. “There were experienced coaches and experienced schools, and organizers really amped up the challenges the kids had to do. It was much more difficult than in the past.”

During the competition, students worked together in hours-long sessions to defend their computer network from simulated cyberattacks mounted by experts, including grad students and industry professionals. Students earned points as they deflected or ejected cyber-intruders.

“Congratulations to Team Togo for winning their second national title, and to all of the CyberPatriot students for their achievements,” said School Board Member Scott M. Schmerelson, whose district includes North Hollywood High. “This program engages students in real-world applications of science, technology, engineering and math, teaching them skills that are critical to the future of our nation. I applaud the students and their coaches for their dedication and excellence.”

Members of Team Togo are Aled Cuda, Kyle Gusdorf, Jonathan Liu, Jaren Mendelsohn and Nikola Pratt. The alternate is Sophia Hewitt. Each of the students will receive a $2,000 scholarship from the Northrop Grumman Foundation.

“The CyberPatriot competition showcases the high-level knowledge and skills that are preparing our students to be leaders of the future who will thrive in a globally competitive workforce,” said Interim Superintendent Vivian Ekchian. “The entire District is very proud of our CyberPatriots and also grateful to the administrators, coaches and families who supported their success.”