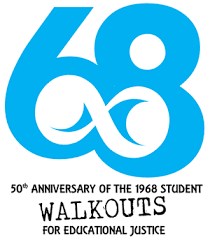 From March 1 to March 8, 1968, approximately 15,000 students walked out of classes from Belmont, Garfield, Lincoln, Roosevelt, Wilson and other Los Angeles area high schools. They demanded equity, and cultural relevancy from the District. Fifty years later, L.A. Unified has made significant progress by increasing our graduation rate to nearly 80 percent, investing more than $18 billion in school repair, modernization and new construction, and integrating a student-centered, Kids First approach.

“We call on the community to join us in raising their voices in support of student dreams and demands,” said Board President Mónica García. “This commemoration recognizes that the student-centered Kids First actions of today are responding to the children of 1968. We are grateful for every civil rights champion for student success along the path toward justice and equality for all. We have made progress, but there is more to do to reach our goal of 100 percent graduation.”

“Today, L.A. Unified welcomes all students, and celebrates our District’s rich diversity,” said Interim Superintendent Vivian Ekchian. “Every student is respected and provided a high quality education. We remember and honor those who demonstrated.”

“I am excited to celebrate the courage and organization of student activism,” said Board Vice President Nick Melvoin. “The student demonstrators of East Los Angeles stood up for their right to educational equity in 1968, undoubtedly paving the way for the students today who are standing up and speaking out for immigration reform, gun control, women’s rights, and more.”

“Now, more than ever, we need to celebrate the voices of young people who have spoken up and advocated for long overdue change in public education and civic life,” said Board Member Scott M. Schmerelson. “I am proud to commemorate the brave actions of our L.A. Unified students in 1968 and to applaud students everywhere who are standing up for peace and justice.”

“As Mario Savio famously stated, sometimes the operation is so odious that you have to put your bodies upon the gears to make it stop,” said Board Member Dr. Ref Rodriguez. “In March of 1968, a critical mass of students lived that idea when they walked out of their schools en masse to demand equity and dignity. The 50th anniversary of that walkout serves as a reminder of those students’ courage, how far we have come since then, and how far we need to go. I am glad we are commemorating their actions, and even happier that we are celebrating their spirit and cause.”

“Fifty years ago, our students organized and demanded a more equitable education,” said Board Member Kelly Gonez. “While we’ve made progress, we continue to fight to ensure that a high-quality public education is available to all students, regardless of their background. Toward this end, every day the board is working to better meet the needs of our most underserved students throughout Los Angeles.”

"The East Los Angeles Walkouts were a pivotal moment in the history of education in our state – and perhaps our nation,” said Board Member Dr. Richard Vladovic. “Students made it clear that they would no longer tolerate conditions predicated by poverty or ethnicity. We've come a long way since then, and still have further to go."

In preparing for the 50th anniversary, a Vision 2068 Committee was formed to plan the following events and activities.

For updates and information, visit https://achieve.lausd.net/vision2068.