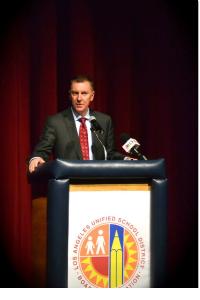 “Say No to Drop-Outs and Yes to Graduation for All”
LOS ANGELES (Aug. 5, 2014) – Touting a litany of achievements, Los Angeles Unified School District Superintendent John Deasy today thanked principals, senior staff and administrators during his annual address in the rebuilt auditorium at Garfield High School.
“Nothing happens in this district without your leadership,” he said to more than 1,300 administrators, who are preparing for the first day of school in L.A. Unified on Tuesday, Aug. 12.
Deasy also thanked members of the Los Angeles School Board for a “remarkable year of support and courageous votes,” before listing a series of new and continuing investments including: Restorative Justice, Equity Index, Local Control Accountability Plan, Local Control Funding Formula, and Common Core State Standards and Common Core Technology Project implementation.
Reading scores rose for fourth-graders and eighth-graders on the National Assessment of Educational Progress, also known as the nation’s report card. Based on that same assessment, black and Asian students in the eighth-grade recorded the highest gains in math in over a decade.
Overall, the number of LAUSD students taking Advanced Placement courses and exams hit an all-time high in spite of the District’s declining enrollment. Suspensions are down. Attendance is up. More than 1,000 people were hired to better educate and support students, while state funds for public education have grown after years of severe budget cuts.
After sharing even more good news, Deasy raised the bar higher—much, much higher.
“I am convinced in my soul that we can successfully graduate every single student, college-and-career ready,” Deasy said.  He explained that LA Unified has an 82 percent graduation rate –which includes students who failed to earn a diploma in four years but refused to quit until they, too, met the requirements a year later. Not bad for the nation’s second largest school district in some quarters, but far from good enough for the superintendent.
“What about the 6,950 students who dropped out?” He asked before insisting, “We can say no to drop-outs and yes to graduation for all.” To drive home this point, he instructed everyone to open an envelope attached to his or her chair. It contained a name of a struggling student—and a challenge.
“Find that youth. Stay with him or her through graduation,” he urged. Those students included in the program – 1,500 youngsters, in all – completed ninth-grade during the past school year. But they remained at-risk of dropping out of school, based on: sliding attendance, rising numbers of failed classes; growing numbers of unsatisfactory marks for work effort and cooperation; falling grade-point-averages; lacking needed credits; or scoring poorly on standardized test scores.
“We are indeed our brothers’ and sisters’ keepers,” he urged. “Because if it is not you, then who?” He encouraged everyone to make a difference – like the L.A. Unified educators who helped one recent graduate.
Vanessa Perez, class of 2014, from City of Angels Independent Study High School, said she “almost didn’t make it.” Because both parents are drug addicts, she ended up staying with five different relatives and attending nine schools in California and Arizona.
Finally back in L.A. Unified, she began ditching school and experimenting with pot and prescription drugs. So, why didn’t she follow the path of her mother and father?
“I had a few adults at school who cared about me.  I want you to know that you make a difference to students like me. You are vital to us. You are our coaches, our motivators and sometimes, our number one fans,” she said.
Superintendent Deasy agreed. Ending his remarks, he said, “We are going to get right at it. In 191 days, there will be no empty seats for youth at LAUSD graduations.”
The superintendent’s annual address will be aired at 5 p.m. today on KLCS-TV, the school district’s station, and again at 7 a.m. on Sunday, Aug. 10. The broadcast is carried on all local cable systems. Please check a program guide for channel location.
Among the achievements in L.A. Unified from the past year:
National Assessment of Educational Progress (NAEP) or “The Nation’s Report Card.”
Advanced Placement
Despite declining enrollment, the number of students taking Advanced Placement courses and exams hit an all-time high with 48,000 tests taken in 2013-14, a 62 percent increase over the last seven years.
Districtwide, enrollment in Grades 9-12 has declined by more than 23,000 since 2006-07, decreasing 13 percent. Yet, from 2006-07 to 2013-14:
###
Contact: Gayle Pollard-Terry (213) 241-6766