LAUSD Chemistry Students Conjure Up a Win and Move to Nationals 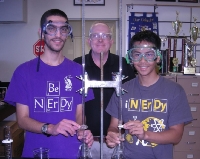 This month, Morgan’s students, Zach Markos and Brian Tom, will take the U.S. National Chemistry Olympiad exam with the top two students from all other participating high schools in the country. Markos is a three-time Olympiad winner this year (math, physics, and chemistry). In addition, he led Bravo at this year’s “Math Day at the Beach” contest where he ranked No. 1 overall for Southern California. He hopes to attend Cal Tech after he graduates in 2013.

Selection for the national exam is based on scores in the local contest. The top 20 students from the national competition then are invited to a two-week intensive study camp held in June at the U.S. Air Force Academy in Colorado Springs, Colo.

While at the study camp, students receive college-level training, with an emphasis on organic chemistry, through a series of lectures, problem-solving exercises, lab work and testing.

“I commend Zach and Brian who participated in the Chemistry Olympiad,” says Morgan. “Whether or not they ultimately win a medal, they are already preparing to help solve the most daunting problems that challenge our world. That’s because science, and chemistry, in particular, holds the key to such things as curing disease, addressing climate change, feeding our expanding population and finding new forms of renewable energy.”

In addition to being a semifinalist in the Chemistry Olympiad this year, Brian Tom was a semifinalist a year earlier in the Biology Olympiad. Over the last ten years, Morgan has taught 11 semifinalist in chemistry, seven in biology, six in math, and one in physics.
http://www.morganchem.com/chemclub/funchem.htm
Print